Have you been pregnant before? How did it go? For me, pregnancy period is like a trip to the sahara desert. It is that serious!

Not all moms-to-be experience the same symptoms when pregnant, and symptoms vary in severity.

A woman will not necessarily experience the same symptoms in the same way in subsequent pregnancies as with her first pregnancy.

Certain early signs, like absence of menstruation and weight gain, are common to all pregnancies.

Other possible early symptoms and signs of pregnancy include:

The expected delivery date is calculated using the first day of your last period. For that reason, the first few weeks where you may not have symptoms also count toward your 40-week pregnancy.

Signs and symptoms: Timeline from your missed period.

Cramping and spotting during early pregnancy

From week 1 to week 4, everything is still happening on a cellular level. The fertilized egg creates a blastocyst (a fluid-filled group of cells) that will develop into the baby’s organs and body parts.

About 10 to 14 days (week 4) after conception, the blastocyst will implant in the endometrium, the lining of the uterus. This can cause implantation bleeding, which may be mistaken for a light period.

Here are some signs of implantation bleeding:

Color: The color of each episode may be pink, red, or brown.

Bleeding: Bleeding is usually compared to your regular menstrual period. Spotting is defined by blood present only when wiping.

Pain: Pain may be mild, moderate, or severe. According to a study of 4,539 women Trusted Source, 28 percent of women associated their spotting and light bleeding with pain. 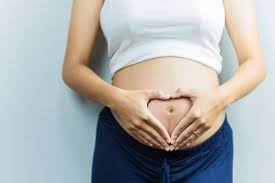 Once implantation is complete, your body will begin producing human chorionic gonadotropin (hCG). This hormone helps the body maintain the pregnancy. It also tells the ovaries to stop releasing mature eggs each month.

You will likely miss your next period four weeks after conception. If you have an irregular period, you’ll want to take a pregnancy test to confirm.

Most home tests can detect hCG as soon as eight days after a missed period. A pregnancy test will be able to detect hCG levels in your urine and show if you are pregnant.

Take a pregnancy test to see if you’re pregnant.

If it’s positive, call your doctor or midwife to schedule your first prenatal appointment.

If you’re on any medications, ask your doctor whether they pose any risk to your growing baby.

Have a jolly cool pregnancy