Jalal brings Bakshi to Jodha to confess to her misdeeds. Hamida slaps Bakshi and admonishes her for betraying Jalal. As Jodha apologises to Jalal, he admits that he trusts her. Jodha talks to Salima about Bakshi, as Jalal orders them to be present at the Diwan-e-Khas. 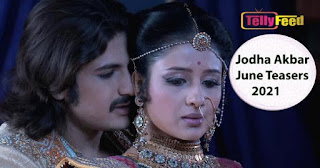 Jalal informs the people that they would have to wait longer for the Sultanate’s heir. Anga learns that Adham gave a necklace to a young maid. Hamida denies Bakshi from joining Jalal’s birthday celebration. Later, Sharifuddin confides in a guard that he wanted Jodha as his wife.

When Jalal meets Rahim, who has the final clue to the gift, Rahim le

ads him to a Tulsi plant instead of a Neem tree leading Jalal to Jodha. Jodha takes Jalal around his kingdom and makes him listen to the villagers’ hitches. Jalal promises to dig a well to manage the water crisis.

Jalal reassures Ruqaiya by stating that she will always remain irreplaceable. Jodha spots Adham touching Tasnim inappropriately and talks to Tasnim’s mother but in vain. Jalal appoints subedars to different provinces in the absence of Anga and Adham. Resham informs this to Anga and she takes offence.

Adham announces at the Diwan-e-Khas his desire to marry Tasnim. Jalal faces a dilemma while delivering his verdict. Jalal declares that he will pass the final verdict on Adham’s actions the following day. Jodha reminds Jalal that women are not provinces to be won by force. Anga warns Ruqaiya and advises her to counter Jodha rather than interfere in matters of the court.

Jalal disguises himself as a bangle seller and learns that Tasnim’s parents are forcing her into marriage. Jalal relates to Jodha’s words and decides to change the law. Jalal is furious as Adham reasons that Jalal married Ruqaiya when she was a child and therefore, must separate from her.