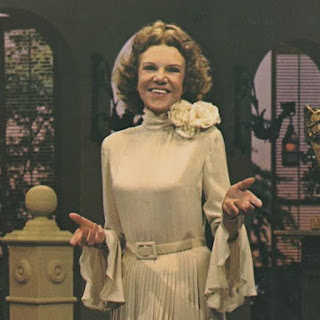 I have been hearing about this wonderful woman of God, and to be sincere I used to think she died in the 90s, but reading her story, made me shiver. She must have really been so loud during her time.

Her full name is, Kathryn Johanna Kuhlman she was born near Concordia, Missouri, to German-American parents, Joseph Adolph Kuhlman and Emma Walkenhorst. After a spiritual experience at age 14, several years later, she began preaching, with her elder sister and brother-in law, in Idaho. Later, she was ordained by the Evangelical Church Alliance.

HER MARRIAGE
Kuhlman met Burroughs Waltrip, a Texas evangelist who was eight years her senior. Shortly after his visit to Denver, Waltrip divorced his wife, left his family and moved to Mason City, Iowa, where he began a revival center called Radio Chapel.
Kuhlman and her friend and pianist Helen Gulliford came into town to help him raise funds for his ministry. It was shortly after their arrival that the romance between Burroughs and Kuhlman became publicly known. Hmmm
Burroughs and Kuhlman decided to wed. While discussing the matter with some friends, Kuhlman had said that she could not \”find the will of God in the matter.\” These and other friends encouraged her not to go through with the marriage, but Kuhlman justified it to herself and others by believing that Waltrip\’s wife had left him, not the other way around. On October 18, 1938, she secretly married \”Mister,\” as she liked to call Waltrip, in Mason City. The wedding did not give her new peace about their union.
The couple had no children. Regarding her marriage, in a 1952 interview with the Denver Post, Kuhlman said, \”He charged—correctly—that I refused to live with him. And I haven\’t seen him in eight years.\” She was divorced by Burroughs Waltrip in 1948. On many occasions in the years following, she expressed feelings of remorse for her part in the pain caused by the break up of Waltrip\’s previous marriage, citing the children\’s heartbreak as particularly troubling to her. She claimed it was the single greatest regret of her life.
HER MINISTRY
Kuhlman traveled extensively around the United States and in many other countries holding \”healing crusades\” between the 1940s and 1970s. She was one of the most well-known healing ministers in the world.
Kuhlman had a weekly TV program in the 1960s and 1970s called \’\’ I Believe In Miracles \” and it was aired nationally. She also had a 30-minute nationwide radio ministry of teaching from the Bible and frequently would feature excerpts from her healing services (both music and message). Her foundation was established in 1954, and its Canadian branch in 1970. Late in her life she was supportive of the nascent Jesus movement, and received endorsements by its key leaders, including David Wilkerson and Chuck Smith.
By 1970 she moved to Los Angeles, conducting healing services for thousands of people, and was often compared to Aimee Semple MacPherson. She became well known for her \”gift of healing\” despite, as she often noted, having no theological training.
She was friendly with Christian television pioneer Pat Robertson and made guest appearances at his Christian Broadcasting Network (CBN) and on the network\’s flagship program The 700 Club.
In 1975, Kuhlman was sued by Paul Bartholomew, her personal administrator, who claimed that she kept $1 million in jewelry and $1 million in fine art hidden away and sued her for $430,500 for breach of contract. Two former associates accused her in the lawsuit of diverting funds and of illegally removing records, which she denied and said the records were not private.According to Kuhlman, the lawsuit was settled prior to trial.
HER DEATH
In 1955, in her late 40s, Kuhlman was diagnosed with a heart problem. She kept a very busy schedule, often traveling across the United States and around the world, holding two- to six-hour long meetings which ended late.
It was reported in her biography that at the time of her passing at hospital as she took her last breath and at her last heartbeat a bright light was witnessed by all, doctors and nurses to momentarily hover over her lifeless body and then before their eyes vanished away. This event is detailed in the biography.
\”The television ministry itself required more than $30,000 a week… To stop, to even cut back, would mean she was beginning to fail. The same was true with the miracle services. As the pain in her chest grew almost unbearable, instead of holding fewer services, she increased the number.\”
In July 1975 her doctor diagnosed her with a minor heart flare-up; in November she had a relapse, which As a result, Kuhlman had open-heart surgery in Tulsa, Oklahoma from which she died on February 20, 1976.
Kathryn Kuhlman was interred in the Forest Lawn Memorial Park Cemetery in Glendale, California. A plaque in her honor is in the main city park in Concordia, Missouri, a town in central Missouri on Interstate Highway 70.
After she died, her will led to controversy. She left $267,500, the bulk of her estate, to three family members and twenty employees. Smaller bequests were given to 19 other employees. According to the Independent Press-Telegram, her employees were disappointed that \”she did not leave most of her estate to the foundation as she had done under a previous 1974 will.\”The Kathryn Kuhlman Foundation had continued, but due to lack of funding, in 1982 terminated its nationwide radio broadcasting. Ultimately, the Foundation shut its doors in April 2016.
Wao