OUTRAGEOUS WEDDING LIST||What would you do as a man

A Nigerian man has cried out over the shocking bride price list he was presented for his traditional marriage by the bride-to-be’s family.

Taking to Twitter, the Abuja based logo and graphics designer with the handle @ekibyleo shared a photo of the list as he lamented saying:

Na marry I wan marry, wetin be this na?

The bride price list, from the image he posted, was divided into two parts. One had items for the father-in-law and the second for the mother-in-law.

Some interesting items and their price tags as seen on both sections included N10,000 for father-in-law cigarette, a table for counting money at N15,000, a knife at N20,000, opening of the house at N50,000. All totalled over a million naira.

Now I see why most Nigerians from the Eastern part of the country are running away from getting married. You hear stuffs like

✓ I don’t have money

✓I’m not ready yet etc 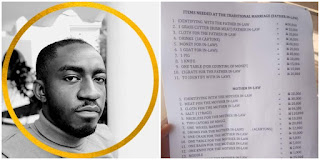 The tweet has since sparked debates among many on social media.

“If I am the lady, I will break up with you because you don’t deserve her. Do you really have to bring it to social media? If you feel the list is unrealistic, take a walk, you did not help them to raise their child, and you don\’t have the right to judge them.”

Should a marriage list be this long? How will the man recover after the wedding?